A Project about Google Transit 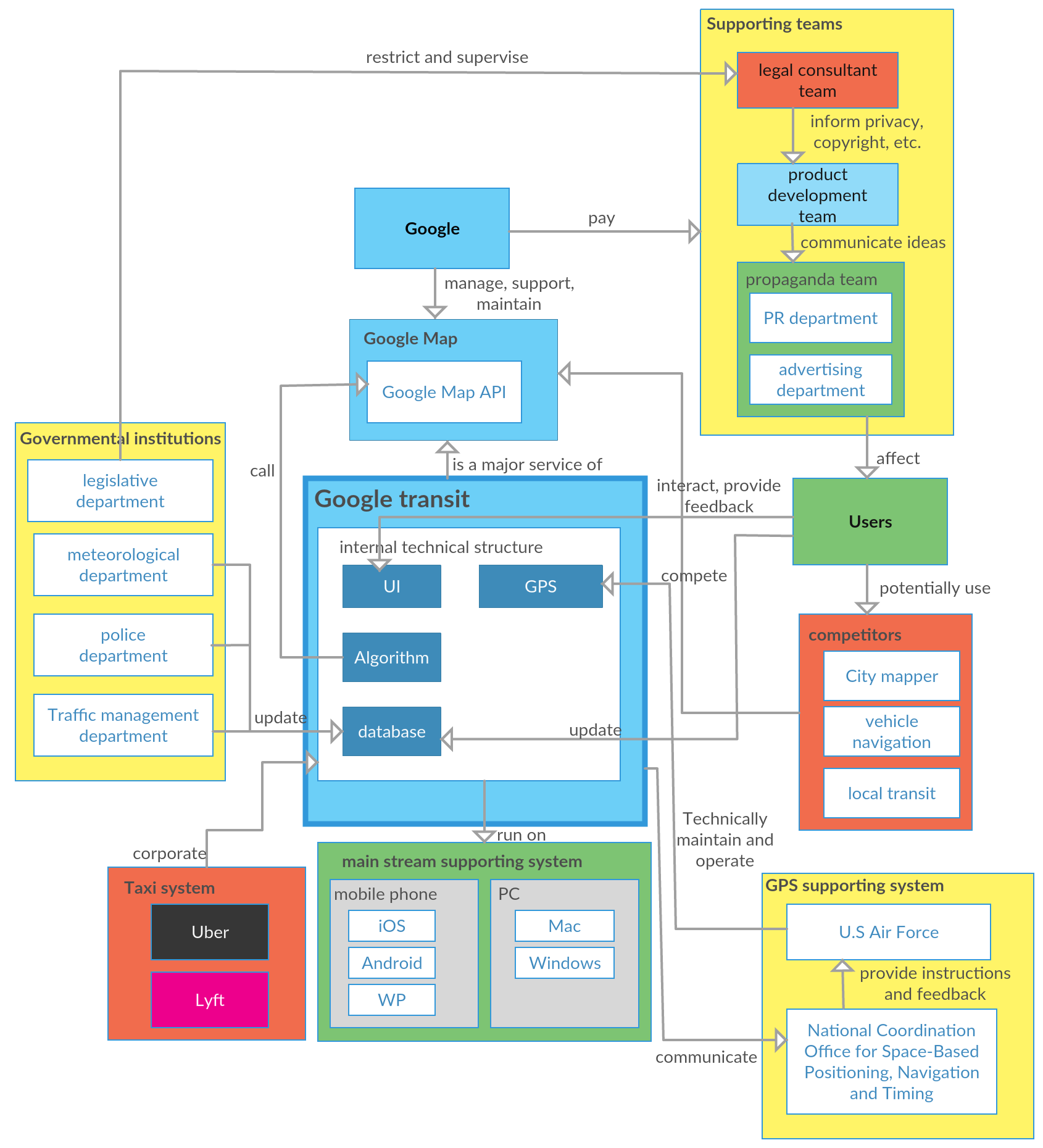 As a major service of Google map which is supported and maintained by Google, Google transit provides options of different routes and recommendation based on user’s request. While inside the blackbox of Google transit there are user interface, algorithm, database and GPS system that are supporting the operation of this technology, outside of this technology, there is a complicated sociotechnical system where each subcomponent (including Google transit) is mutually interacting with other and working together as a whole. There are 7 subcomponents in this sociotechnical system as follows.

6.   Main Stream Supporting System: The main stream supporting system including iOS, WP and Android for mobile phones and Mac, Windows for PCs are which Google Map can run on (remember Google Transit is a major service which is invisible on the Google Map as an application). Users can download related version on app stores based on those system onto their electronic device while the version of the operating system should support the operation of the application. Besides, the download behavior of users would not only benefit the Google Map as an application but also the application stores.

7.    Taxi System: the taxi system, namely Uber and lyft, are the corporator with the Google Transit system. Users can request an Uber or Lyft ride directly from the Google Map application. Take Uber as an example, its already been easy to compare wait times and the pricing of available Uber options. Functions including requesting a ride, seeing the driver’s route, contacting the driver, following your trip status and submitting payment can currently all be realized without having to switch over to the Uber application (Getting an Uber in Google Maps Just Got Easier, 2017).

Therefore, as a sociotechnical system in total, what did it look like before the technology? First, the cost of planning on a trip for users was relatively higher before this technology: people had to rely on printed map, compass, the time table of public transport system and vehicle navigation for the information of location and route. As a new technology, Google transit, to some extent also inspired a new phenomenon, i.e., the DIY Tour where people no longer have to follow the rule of travel agency. Besides, for the governmental institutions, they have to keep setting higher standards for the protection towards the legally inaccessible region (every user is able to update information of new location towards the system). Meanwhile, think about Google Map as having 741k download amount merely in the apple store on iOS in the U.S, the technology is accessible to a large amount of data based on users’ travelling behavior including the places that are popular, the peak system, people’s custom of travelling, etc., the technology therefore either sell the data to third party agencies or provide suggestion for the fundamental governmental institutions. And what are the forces that are trying to change the system?

There are also several forces that are affecting the system. First, the users’ constant feedback and constantly generated need would help the system to keep updated. Second, related governmental institutions rely on the technological for data and information, while at the same time they are constraining the power of the system intending to let the technology better serve the government. Besides, inside the whole company, the release of new version of the supporting system and the technical development from the product development team fundamentally shapes the technology. Moreover, the competitors and cooperators, together with Google transit, work as a larger system where every subsystem is promoted, inspired through the forces from the system.

Choose from a wide variety of cars in all sizes, also available for a daily or weekend rental plan.

We offer the cheapest international and domestic ticket prices, which you can book online or after ariving.

From the most known hotels to the hippest AirBNB apartments, you’ll find out the best place to stay.

The clubs, the bars, the live shows. There is so much to do in Tel Aviv, and so little time to do it.

Enjoy the finest cuizine Israel has to offer, from local Israeli street food to the top chef menus.

If it’s fun you’re after, it’s fun you are going to get. Explore the TA music scene and find out what it’s all about.